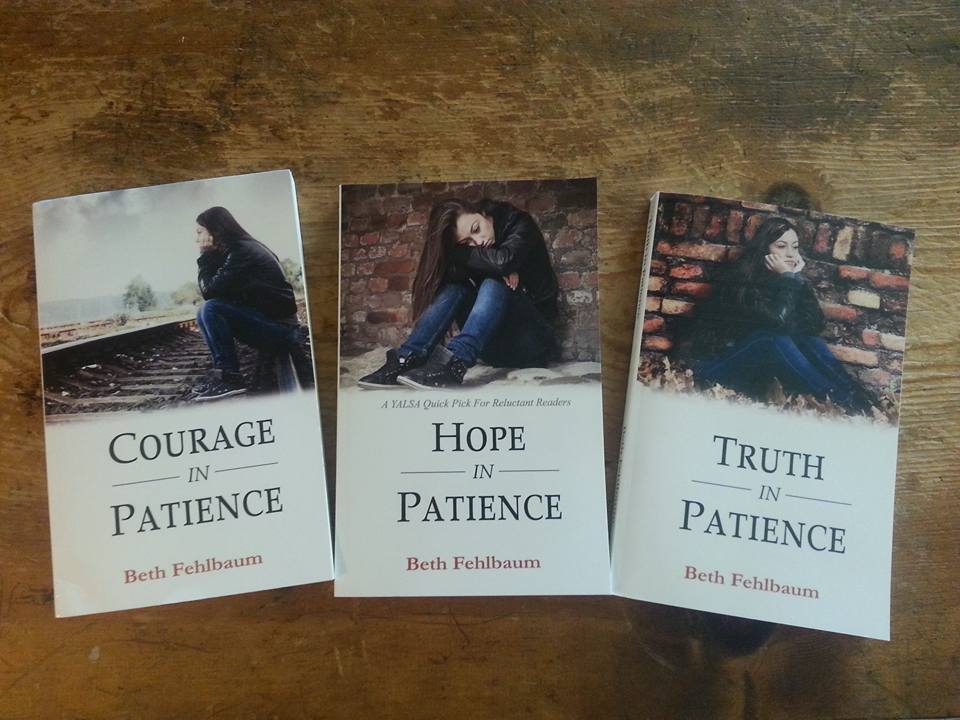 Synopses of all 3 Patience books: Courage, Hope, and Truth

Ashley Nicole Asher’s life changes forever on the night her mother, Cheryl, meets Charlie Baker. Within a year of her mother’s marriage to Charlie, typical eight-year-old Ashley’s life becomes a nightmare of sexual abuse and emotional neglect. Bundling her body in blankets and sleeping in her closet to try to avoid Charlie’s nighttime assaults, she is driven by rage at age 14 to tell her mother, in spite of the threats Charlie has used to keep Ashley silent. Believing that telling will make Charlie go away, instead it reveals to Ashley where she lies on her mother’s list of priorities.

Ashley’s psyche splinters into shards of glass, and she desperately tries to figure a way out, while at the same time battling numbness and an inability to remember what happened when she blacked out after Charlie tackled her. She knew that when she awoke her clothes were disheveled and the lower half of her body was covered in bright red blood– but she has only a blank spot in the “video” of her memory.

When Ashley’s friend, Lisa, sees a note from Cheryl telling Ashley that Charlie would never “do those things to her,” and insisting that she apologize for accusing him of molesting her, Lisa forces dazed Ashley to make an outcry to her teacher, Mrs. Chapman.

By the end of the day, Ashley’s father, David, who has not seen Ashley since she was three months old, is standing in the offices of Child and Family Services. He brings her home to the small East Texas town of Patience, where he lives with his wife, Beverly, their son, Ben, and works with his brother, Frank.

Through the summer school English class/ Quest for Truth taught by Beverly, an “outside-the-box” high school English teacher whose passion for teaching comes second only to her insistence upon authenticity, Ashley comes to know people who are confronted with challenges they must face head-on. The choices they make will not be easy—but they will be life altering. Will Ashley have the inner-fortitude to survive the journey to recovery and the effects of Post-Traumatic Stress Disorder? Will Ashley find her voice, speak up for herself, and break the bondage of her abusive past?

Ashley Nicole Asher, 15, is a mess. She’s starting a new school in the tiny East Texas town of Patience, Texas, but that’s not her biggest problem. It’s her mother, Cheryl, who can’t see that the sexual abuse perpetrated on Ashley for six years wasn’t Ashley’s choice. A woman who, even after her husband, Charlie, breaks Ashley’s arm in an attempt to take her back to their home in the suburbs of Dallas, still testifies on his behalf at his trial for injury to a child. Ashley’s stuck in a cycle of self-injury and self-hatred as a result, and the people who love her are struggling to pull her out of it.

David, Ashley’s long-absent father, hadn’t seen his daughter since infancy, until he showed up in the offices of Child Protective Services to bring her back to his home in the woods of East Texas, and the life he’s built with his wife of ten years, Beverly, and their son, Ben. No longer a heavy drinking rage-a-holic, he’s sworn he’ll spend the rest of his life making up lost time with Ashley, and hopefully earning her trust and love.

Beverly is balancing her life as stepmom to Ashley with her job as a high school English teacher, and her reputation in the community as a magnet for controversy.

Scott “Dr. Matt” Matthews, a slightly unconventional, drop-kick-the-teddy-bear and kick-the-desk therapist, is determined to pull Ashley out of the darkness she crawls into when her self-destructive tendencies overtake her better judgement, and the “squirrel on speed” that gets going in her mind is making laps and chugging Red Bull.

More than anything else, Ashley craves normalcy. She envies girls who can experience relationships with guys without fear of being touched, and she wishes that being a consistent back-of-the-pack finisher in cross-country was her biggest problem.

But.. do other people have it that easy?

Krystle “K.C.” Williamson has an electric guitar named Kurt and a mother who believes that the best cure for K.C.’s homosexuality would be a trip to J.C. Penney’s to pick up some cute skirts instead of the t-shirts and jeans that K.C. wears every day.

Pam Littlejohn is driven by jealousy and insecurity to push herself hard for a cross-country medal in State, and to spread the rumor that Ashley moved to Patience because she had an affair with her stepfather Charlie.

Marcus Merriweather is so afraid of not having all the answers, he hides behind THE Holy Bible (the only “version” that’s right), and a stiflingly narrow world-view.

T.W. Griffin quit his position as running back for his father’s Patience Panthers football team, and now his dad’s hell-bent on making Bev Asher pay for taking his son from him.

Zaquoiah “Z.Z.” Freeman, self-described as “bountiful, bodacious, and beautiful”, is fighting the urge to knock Pam’s smirk right off her face and beat Marcus to death with his holier-than-thou attitude. She’s still reeling from her cousin, Jasper, being nearly beaten to death earlier in the year, and depends on dancing to help her deal with the fear that comes with being a racial minority in small Southern town.

In a shocking turn of events, Ashley is forced to choose between living her life or longing for a relationship that was never what she had convinced herself it had to be. Will her new family be enough to keep her from treating her skin like a scratching post, sliding back into suicidal fantasies and hiding in small dark spaces?

Ashley Nicole Asher is finally adjusting to life in the small town of Patience, Texas. She’s been going out with Joshua Brandt for three months and he’s wild about her…but what will she do when memories of childhood sexual abuse intrude with the natural progression of their relationship?

Ashley’s mom, Cheryl, marks Ashley’s sixteenth birthday by sending her a boxful of Ashley’s baby clothes and photos with Ashley cut out of every one of them…and Cheryl still won’t admit that her late husband, Charlie, stole Ashley’s innocence.

Dr. Matt, Ashley’s slightly unconventional therapist, is determined to help Ashley see that just because her body reacted to the things Charlie did to her, it does not mean that Ashley chose to participate in the abuse, and that the only way to freedom is to embrace truth.

Ashley’s father, David, and stepmom, Bev, are at the breaking point when it comes to dealing with Ashley’s tendency to self-mutilate when she is angry or hurt. And Bev’s dealing with challenges in her job, too, as an English teacher at Patience High School. When all of her students choose the controversial novel—Chris Crutcher’s Whale Talk—for their independent study of a multicultural book, she wonders if she will again have her feet held to the fire at a school board meeting for guiding her students to ask hard questions.

When Jeff Foster’s dad opens the “Dixie Pride” store as a means of dispelling the “myth” that the Confederate flag represents slavery, Jeff comes face-to-face with students whose family members were directly involved in the Slocum Massacre. Soon, he comes face-to-face with his white-hooded father as well, and he must decide for himself what kind of “pride” his dad is really selling.

As Dr. Matt says, “Life’s Messy”—and Ashley’s friends and family are finding out just how messy it can be.

Ashley’s Human Ecology teacher, Ms. Manos, is teaching the students about dating and love relationships —in between running to the hallway with bouts of morning sickness and planning her wedding to Ashley’s Uncle Frank. Ms. Manos will be relieved if she can keep her pregnancy a secret before the news gets out in the tiny town—and also if she can get Travis Hager to stop referring to sex as “Bow-chicka-wow-wow.”

K.C. Williamson’s mother has taken up full-time substitute teaching and volunteering at Patience High School, because if she’s watching her all the time, she thinks K.C. won’t be gay.

And, when Ashley’s grandparents go on an extended vacation and Cheryl is all alone, Cheryl insists that Ashley come back to her: after all, she has papers proving that she has primary custody of Ashley.

In a heart-pounding, long-awaited confrontation, Ashley must find a way to get her mom to see that the game playing won’t work anymore. Ashley insists on TRUTH IN PATIENCE.